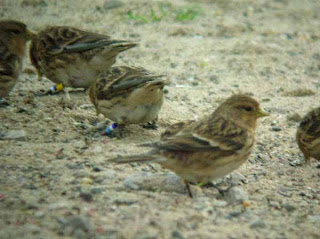 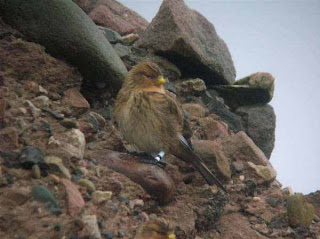 Heysham Obs
Twite pics
Thanks to Gavin Thomas for these taken yesterday. The singleton is an ancient bird by Twite standards bearing a ring combination from autumn 2004. The other pic shows (right to left): an unringed bird, Heysham autumn 2008 bird, Askam in Furness autumn 2008 bird

Not much sign of birder activity on a cold dreary morning!

Elsewhere
9 Waxwings between Asda and the Morecambe road roundabout 0945-1010 at least but not 1120, although mobile singleton seen late morning. Long-tailed Duck still by Mill Inn, Conder, on canal. No sign of any Buzzard spp. which could be attributable to the RLB (i.e. no "possible/brieflies", but plenty of Common Buzzard) in Leighton area. Max of 13 Waxwing by the bus stop next to Carnforth railway station/Booths car park but not seen after mid-afternoon. Single Waxwing briefly on Borrowdale Road, Lancaster. 4+ (probably 7)Whooper Swan Lune valley between Hornby and Melling.