A glimpse into an insect migration corridor.

Went to wooden jetty area 3.5 hours after high water to see if any ringed Mediterranean gulls were in reading range. There was only one unringed adult.
However, I noticed a gentle flow of butterflies coming in off the sea between the wooden jetty and lighthouse (MD)
08:45 - 10 butterflies per 5 minutes. 8 of these Small White, the others a mixture of Painted Lady, Meadow Brown and Peacock.
09:30 - rate had increased to 8 butterflies per 2 minutes. They were too erratic to say 4 a minute. Ratio of species similar.
The last time I'd witnessed such a movement of butterflies here was 27/06/19. On that occasion the dominant migrants were Painted Lady, but they were accompanied by dragonflies, including Red-Veined Darter.
On that occasion the breeze was due East this morning it was similar at ENE.
There was no sign of dragonflies this morning, but it was early, so I decided to check again after lunch. On way off I counted 65 Small White between lighthouse and waterfall.

I returned at 13:00, unfortunately, the breeze had swung around completely to SW. The flow of butterflies had stopped, but there were still lots of insect around, including Red-Veined Darters:

There were at least three females and another, almost certainly, female seen flying away. I retraced my steps and only relocated one. After that they had all moved inland. I don't know when the breeze shifted from the east, but I had just got there in time to see the last of the arrivals move on. 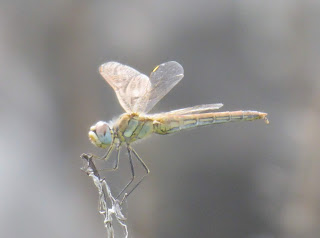 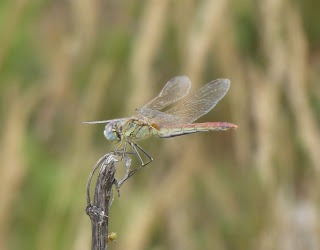 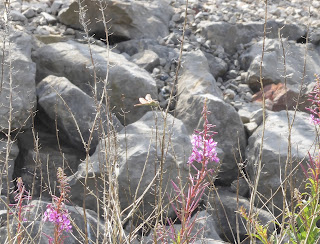 Personal thoughts on this "corridor" - After 3.5 hours ebb, and for the next 9 hours, this small section of sea wall will be the only landfall on the west facing coast from Fleetwood docks to the north of the bay.
By "landfall" I mean a point were an insect can go directly from flying over water to flying over land. Presumably, this must have some advantage to flying over mud flats.
Worth checking next time we have an easterly breeze and tide is not near high water.

Rock Pipit - female by herself on wall over nest sites.

Mediterranean gulls - by 13:30 there were 5 adults on beach near jetty. Plus these 12 on rocks on western end of beach. Juvenile (top right) has yellow darvic ring. 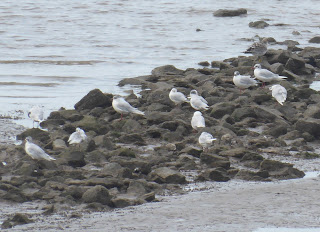