Quiet CES visits as most of the summer migrants are incubating

Middleton NR 0430-0830!!
Lesser Redpoll - for the second day, one in song flight most of the morning and two others which flew north much higher up
Grasshopper Warbler - one singing very first thing
Swallow - flock of 6 purposefully north
Sedge Warbler - The French-ringed and British-ringed bird from elsewhere were both re-trapped today, indicating that they are breeding on site
Greenfinch - a quite 'old' fledged young was ringed
A single 4-spotted Chaser was flying at 0700hrs - it was 2 degrees C first thing!

Moths
Clouded Bordered Brindle was new for the year 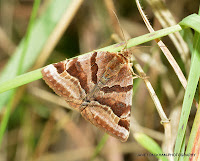