Heysham Obs
Classic morning where if you waited for 'full daylight', you missed the landfall action.  At least 20 Willow warblers whizzed through as the nets were being set at 0615hrs and the only ones caught were three during the setting and a single on the next round with the nets fully spread out, then nothing until one mid-morning.  0700 onwards = 'dead' as the sky cleared

Well-timed outside tea break
Tree Pipit - one north at 1125! (first of year)

Insects
A circuit of the reserve produced 3 Orange Tip and 4 Speckled Wood amongst ones and twos of the hibernators.  Another Shoulder Stripe graced the moth trap 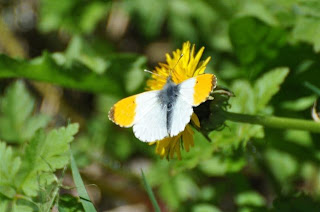