Heysham Obs
A bit of a time warp as I arrived at Heysham Nature  reserve with a squeak from up above and a "typical vis mig mode flying at an angle to the wind and the right height and right direction" Meadow Pipit heading south-east.  There have been some late birds on the north harbour wall but this was the first in 'vis' mode for a bit

North wall area
It only took a handful of thoughtless (off-lead) dog walkers heading along the ex-heliport seawall at or just after high tide, to displace almost 6,000 Oystercatchers from their roost.  One of them was spoken to and amazingly "had not noticed the birds"!  I think the end of this roost is nigh; already the more skittish Knot seem to have given up the ghost.  A shame as it was a very good site for excellent close views, with the birds tolerating any amount of parked vehicles along the road and the usual industrial activities.   Time to address the whole issue of dogs and intertidal protocol, I guess - maybe in the Visitor  column

Purple Sandpiper - 2 at the far end of the seawall, presumably one of these photographed on its own near the red gate later on
Pink-footed Goose - 72(ish) high to NW - the flock may/appeared to also contain two Whitefronts but they couldnt be clinched
Cormorant - 109 on wooden jetty
Meadow Pipit - 4 mound
Twite - 12 mound
Linnet - 2 mound
Dunnock - one mound & one on Twite seed
Med Gull - adult in harbour 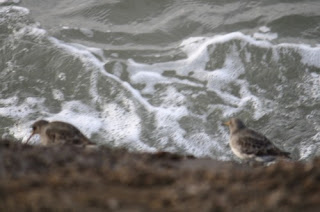 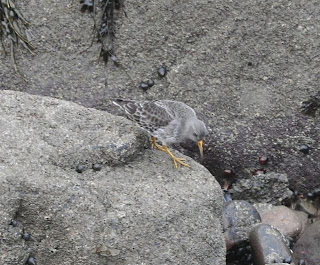 Thanks to Pete and Janet respectively, presumably two, not three birds (see above)
Ocean Edge saltmarsh was surprisingly 'dead' with no small passerines noted
Wigeon - 102Outfalls/Red Nab
Posted by Pete Marsh at 12:38 No comments: