Heysham Obs
The Little Gulls were all at long-range apart from the harbour birds and for 'adult', read 'adult or 3CY' 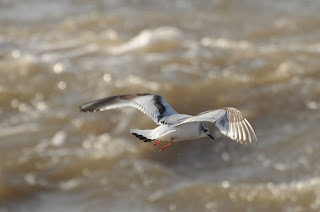 Outfalls 1000-1010
Little Gull - 21 adults and presumably the same 7 2CY as yesterday - the adults were mainly at the seaward end.  Therefore 32 Little Gulls seen in total this morning
Kittiwake - 2-3 2CY
There may have been other Kitts and Little Gulls resting on beach with BHG, but not visible from O Edge

IOM passenger ferry followers 1215ish
Nice idea in theory but subhorizontal heavy sleet straight into the optics & poor visibility rendered it pretty impossible.  c15 Kittiwakes in the murk (but could have been 100), at least one ad little gull, presumably one already recorded