Behaviour by photographers around the Chough has been pretty good with eg favourable comments from locals.   Not this morning.   A single individual followed and kept flushing the Chough all over the first two fields by half moon bay 1000-1030ish.   It just couldn’t settle down and feed and this was observed and commented on from eg the cafe.  In this respect, it takes a bit of time to locate and extract its main current prey item - earthworms.  Later photographers showed how it should be done.  Can you please remember that you are in a very public place here and your conduct will be being observed by the many locals who are aware of this bird.  There is a big difference between a single flush by a passing dog and being chased around the field!

Iceland gull - third winter by waterfall in the morning and perhaps surprisingly by all accounts over the tide in the afternoon
Pale bellied Brent Goose - now three birds feeding on skeer off the horse fields north of Heysham head (low tide), one of these flew south on its own 1100ish - presumably the extra one.  This then disappeared and the usual two were on Red Nab on the later incoming tide and again (flying from south) as the tide dropped
Chough - in the first two fields north of 1/2 moon bay café
Med Gull - Czech bird on the north wall railings; it or another harbour mouth late pm
Velvet Scoter - drake accompanying the second and last Eider gang offshore but quite distant
Great-spotted Woodpecker - drumming on Heysham Head
Eider - about the same numbers and distribution as yesterday
Red-throated Diver - one offshore
Great-crested Grebe - c5 offshore
Red-breasted Merganser - just 3 offshore
Scaup - as is absolutely typical of this species - no sign of what looked like a 'settled' flock!
Shag - juv seen around wooden jetty early pm: 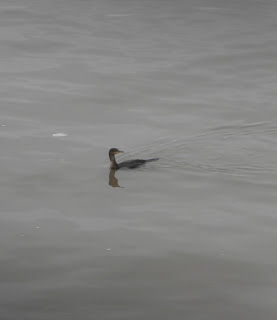