Game on for all you local coastal/bush searchers! 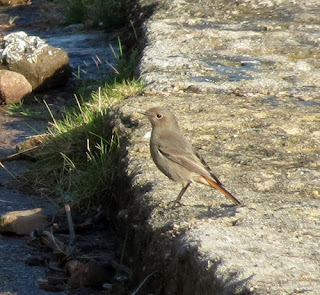 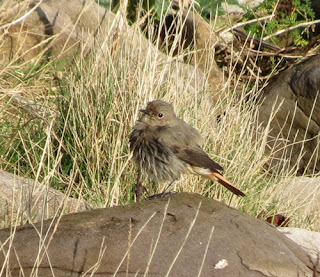 Todays north wall 1st winter Black Redstart before and after a bath.  Thanks Rosie and Mario
Heysham Obs
Impressive day with all sorts of odds and ends, ironically on the first day for some while without any evidence of early morning thrush arrival.  Re-the heading, note that two Snow Bunting are at the tip of Sunderland Point today

Highlights
Firecrest - (probably but not certainly a male (very rusty shoulders but crown not seen properly)) Heysham NR car park with tits 0730ish, then headed for the top path trees with the tits.  Not intensively searched for subsequently due to other things to do
Black Redstart - north harbour wall on the old control room roof (only building there) in the former sandworks compound  0945ish & in the same general area to lunchtime at least but then seemed to be flushed by walkers and may have flown over to the other side of the harbour
Dark-bellied Brent Goose - Adult appeared around Red Nab just after high tide with returning Wigeon & was still there at 1320hrs

Insects
One Red Admiral flew south past the office.  The element of east in the wind is no good for the moth trap, despite high night temperatures
Posted by Pete Marsh at 09:57 No comments: