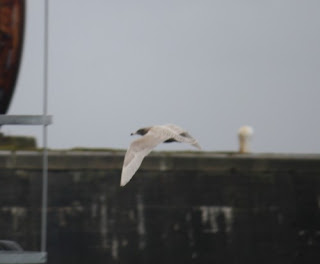 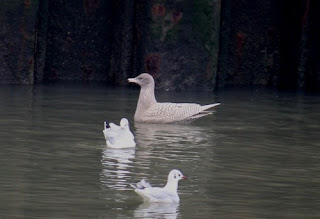 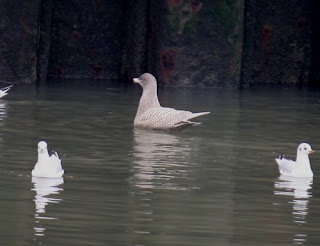 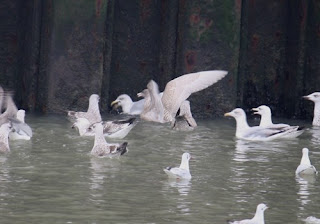 Thanks to Pete Cook for these pics
Heysham Obs
It has taken time, as it usually does before the turn of the year, but the gales are producing the goods.  This site really comes into its own in winter after a few days of strong onshore winds, both on the outfalls and in the shelter, and food availability under the waterfall, of the harbour

Inshore
Glaucous Gull - juv feeding below the waterfall late morning and still around the harbour area to at least 1445hrs
Shag - mobile juv touring the harbour
Little Gull - two 1CY still on outfalls
Kittiwake - c18 in harbour
Guillemot - 4 in or just outside the harbour, one offshore
Purple Sandpiper - one on wooden jetty outer section
Twite - up to 30 seen with 17 around the feeder
Med Gull - three adults, one quite 'black-headed'
Sanderling - still with Dunlin on Oceab Edge beach
Eider - 1CY male inshore
Little Grebe - one in the inner harbour (thanks to the couple of birders for alerting us to this)

Moths
They got into the act for the first time for a few days with Mottled Umber and Winter Moth
Posted by Pete Marsh at 13:29 No comments: