Last winter the routine of the Brent geese, feeding at Heysham, was to feed on the north side, typically out from the children's play area just north of Knowlys Rd, until displaced by the higher tides. When they would move to Red Nab/Ocean Edge at high water.
This year they have only been seen at high water at Red Nab and Ocean Edge. The reason they have not been seen on the north side became clear today. They are feeding so close to the sea wall as to make them impossible to see from the normal vantage point on Knowlys Rd.

The first image below shows today's location of 3 pale-bellied Brent geese. This is just north of the play area. The birds are easily visible from the promenade, but surprising well camouflaged in this terrain. 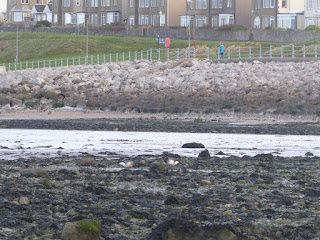 This second picture shows the birds more clearly. Both pictures were taken at low water. 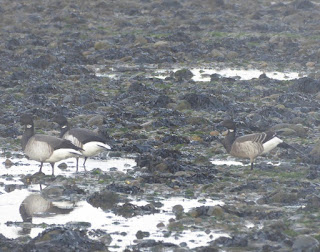 The Brent were still on the same rocks just before high water, finally being flushed off at 3:30 by a couple of dogs. They only flew as far as the skeer just out from Heysham village.
A Mediterranean gull (not the Czech ringed bird) was also on the shore at this time. The pictures below were taken from the NW outside corner of the children's play area.

This first one shows the Brent feeding, and the Med gull on far left. N.B. Pete has identified the Brent as being two adult birds with a juvenile. 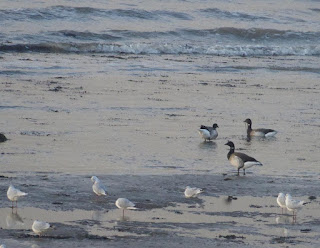 This is the best (albeit grainy) picture of Med gull. 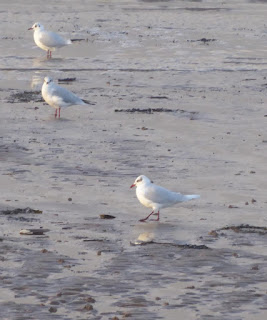 And finally the Brent moving on (MD) 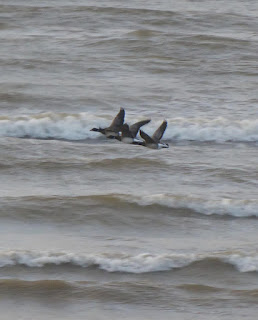 The low tide channel revealed 240 Eider, but no Scoters today

Two Siskin caught by the office, one ringed elsewhere

Rock Pipit - one near gate 38. Half Moon bay bird not showing

The mute seem to have sorted themselves out into 3 pairs (main, Tim Butler & no swimming ponds). Plus the 4 immature on main pond.
Moorhen 8
Coot 1
Gadwall 21
Mallard 5
Tufted 3 (2m)
Shoveler 2 (m&f)
Teal 5
Common snipe 3