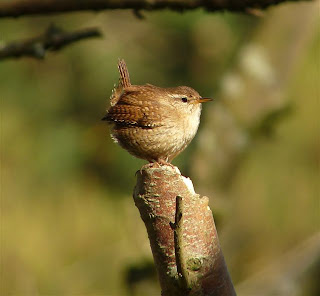 Wren at Ocean Edge - thanks Janet


One of those days where lots of things tried to happen but the results were meagre to put it mildly.  For example, four blank mist net rounds and a second morning of zero moths.  The highlight was the lack of manic panic at nearby ASDA petrol pumps

EDF Energy challenge
There is an internal challenge between the EDF sites replacing the unfortunately unsponsored BTO/Business challenge.  Please keep an eye open for megas on the EDF properties such as a Coot or Little Grebe brave enough to visit the dog-walk pond - they don't count on Middleton ponds.  I'll publish a list of what we still "need" soon e.g. the likes of Stock Dove.  In this respect, note the finger of land which runs along side Middleton and the golf course - this is EDF property (see map in office)! Also note that any seabirds which traverse the outpourings from the Power Station outfalls count as does anything on Red Nab.  Anything on the north harbour wall/mound area, however, needs sending to the other side of the harbour mouth.

Ringing recoveries
Included a colour-ringed Grey Wagtail from autumn 2011 was recorded at Carne sewage works in Wiltshire during December, but somewhat mysteriously identified as an adult male (ringed as an 'obvious' youngster)

Offshore
A sample 25 minutes produced:
Red-throated Diver - 2+1 'out' in the "heat" haze

Heysham office area
The birds on the feeders melted away as soon as the nets were set, but a single Chiffchaff was a bit of a surprise in the conditions and this remained the only tangible evidence of night migration (no Wheatear seen)

Nice to meet the birder/angler who is involved with the Shell Carrington reserve - hope the fishing was better than the birding and/or you connected with one of the two northbound Ospreys which may have flown over the Bay en route to Leighton.  More birder/anglers very welcome, especially during the spring seawatching period and winter months!
Posted by Pete Marsh at 18:52