Heysham Obs
This morning could have been labelled as a typical half-decent late autumn migration day of dribs and drabs, with peak movements of all the main passage species done and dusted, but for one thing - we are still awaiting any Fieldfare (Woodpigeon passage is not a major feature here for some reason) and this was supposed the be THE day.   I suspect we have not taken into account that half the night was probably unsuitable for migration and therefore we are too far west.  I wonder what vis mig sites to the east experienced? 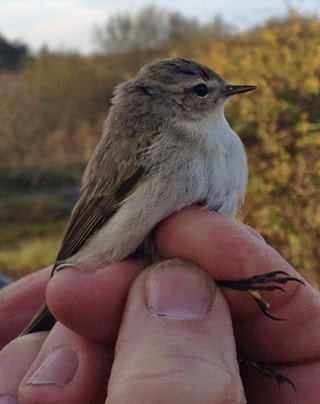 Siberian Chiffchaff? What struck me (Jean) was the different (colder) tone of brown to the usual Chiffchaffs, the noticeable supercilium and especially the jet black legs.

North Harbour Wall Feeding Site - 06.30 to 11.30
Chaffinch - 12 on seed at dawn on arrival.  Whoosh net set up and two caught as they returned with Twite.
Twite - group of 15 caught and ringed.  Then 10 appeared on sandplant fence/gates but did not use feeding area.  Mid morning, a further three caught, including a retrapped bird from jan/mar 2011.
Possibly new birds arriving.
Linnet - c6 only seen but did not use seed.
Goldfinch - One only with Linnets.
Meadow Pipit - One grounded bird
Great Spotted Woodpecker - appeared in Sea Buckthorn and flew off northwards until out of sight.
ajd