The berry stains of autumn 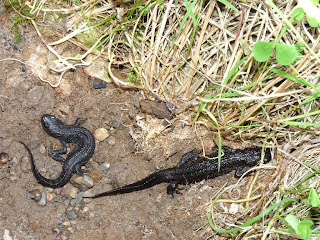 Great-crested Newts Middleton NR today - thanks Janet - quite a few consultants working on various pipelines etc. have reason to be grateful for these creatures at this site!
Heysham Obs
Middleton IE CES
This was rather odd.  It was absolutely dead first thing and an extra net was set on the western side.  In the absence of any overnight birds, this net started to fill up with new birds arriving from the seaward side and we ended up with a marked contrast between standard CES nets (3 birds caught in four 18m nets) and supplementary 18m net (about 25 birds caught).  Then a  Long-tailed Tit flock & 'entrails' went into the supp.
net JUST after the CES time period.  Bureaucratic nightmare!

Grasshopper Warbler - three males still singing, including one near the model boat pond car park and (unringed) adult & two juvs ringed
Common Whitethroat - one berry-stained/staining juv plus another three juvs ringed
Blackcap - 4 juvs caught 'out of habitat' - this exemplifies just how early the British population can start to migrate, rather 'masked' by the complication of late autumn Scandinavian passage migrants and central European wintering birds!
Sedge Warbler - very few around - just two unringed birds caught
Kingfisher - one
Swift - 22 south
Willow Warbler - just four ringed
Chiffchaff - one ringed by the HNR office on 26/7 was caught in the Middleton CES nets, a movement of about 1.8km in 7 days!

Moths
Fairly good catch but nothing particularly of note

Butterflies
Mass break out of Peacock on the office buddleia (max of 9) plus the two Red Admiral still
Posted by Pete Marsh at 15:23 No comments: