Heysham Obs
Missed out on the early morning rain showers and, in conjunction with a lot of 'useless' uniform high cloud at dawn, there was not a lot happening other than vis mig.  Best for a lot of effort was a Spotted Flycatcher grounded and two Common Buzzard overhead

Grounded on Heysham NR
Spotted Flycatcher - 1 eastern woodland in large sycamore
Whitethroat - 1 by office
Chiffchaff - 3-4 scattered
Blackcap - female with LTT flock
Goldcrest - one!
Robin - not so much in evidence today and only 2 ringed
Dunnock - see above
Coal Tit - 2 ringed and at least 3 with Long-tailed Tit flock 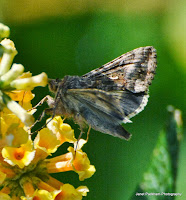