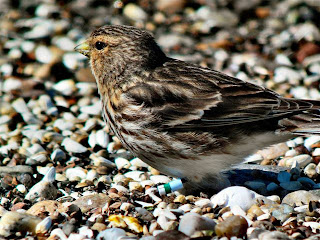 Here is a spring 2010-ringed Heysham Twite on the sunny Mull of Kintyre at Machrihanish Seabird Observatory last week, along with several other Heysham-ringed birds.  They will either remain in that area or disperse over the nearby inner Hebrides or coastal mainland Scotland if previous ringing recoveries are anything to go by.  Thanks to Eddie Maguire for this pic (see website on Links)

Heysham Obs
Middleton IE CES
Spoilt by being a little windy during the last hour of the three but a few Sedge Warblers, two Reed Bunting and a Whitethroat & Wren were caught
Greylag Goose - pair blogging - the only thing of note other than the obvious residents which included Grasshopper Warbler

Elsewhere
Two female Dotterel on Abbeystead Lane with the Golden Plover flock today after none yesterday (despite the full quota of GPs).  Therefore 5 individuals presumed to be involved in sightings there this last week
Posted by Pete Marsh at 14:08 No comments: