Migrants in the mist

A decent day which could have been even better with a dawn start.  Arrival about 0900 saw quite a few long-winged Blackbirds, prompting a couple of mist nets

These produced an amazing (for here in spring) ten migrant Robin as well as 14 more predictable Goldcrest and a few migrant female Chaffinch.  A single Siskin was unusual and a couple of Chiffchaff include a bird with pollen on its forehead 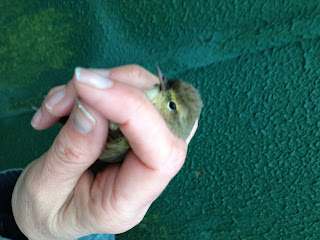 In the meantime coastal coverage produced 178 Meadow Pipit grounded on Ocean Edge and 55 on the heliport in the murk with single Wheatear at Red Nab.