A decent array of species........eventually 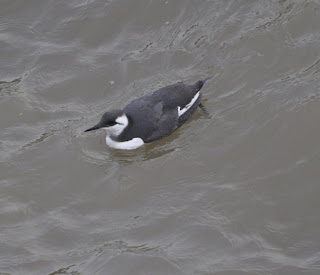 One of the two Guillemot in the harbour this morning.  Thanks Janet
Heysham Obs
The birds were not being 'consistent' this morning and it was really unfortunate to see a visiting couple of birders, including a keen youngster,leaving just too early to see anything.  Always worth taking your time when visitig the north harbour wall as birds can hide in many nooks and crannies, notably the corners of the harbour during strong winds

Harbour/north harbour wall
Shag - juvenile on the wooden jetty this afternoon (first for a bit - very tricky to see this autumn, with all so far being single point in time (not even single day!) observations)
Purple Sandpiper - two flew in about 0930 nd sat on the seawall at the harbour mouth
Guillemot - two tucked right in the SW corner near the 'shag waterfall'
Kittiwake - 1CY SW corner of harbour, 3 1CY & one adult Stage 2 inner end at various times
Twite - 8 on the seed
Med Gull - adult(s) north wall and Heysham one outfall at different times
Little Gull - adult at the seaward end of the outfalls/in the boat channel

Reserve
There has been a definite influx of continental Blackbirds over the last three days as the weather has turned colder, starting with an unexpectedly large flock of 26 along a hedgeline at Wray on 1/12 (area walked virtually daily during November).  There were at least 20 restless individuals on the nature reserve today, some of which moved down Moneyclose Lane using the 'seeiiip' call you often hear from continental night/early-morning-landfalling migrants, but not usually, apart from at roosting time, from "British" birds
Posted by Pete Marsh at 10:13 No comments: