Heysham Obs
Decent number of Tree Pipit by our standards this morning but little else other than an individual of our 'rarest common wader', Golden Plover, overhead

Middleton NR 0600-0930
Tree Pipit - 7, mainly SE, but one on NE to SW heading
Golden Plover - one south
House Martin - flock of 7 south
Swallow - 35 SE after 40-50 lifted out of roost in the western marsh reedbed
Grey Wagtail - 2 SE
Reed Bunting - 3 lifted off and headed SE soon after dawn, 2 further singletons SE
Chaffinch - 3+2+2 high to south
Hardly anything grounded with unringed summer migrants in the CES nets comprising one Sedge Warbler, 2 Chiffchaff and 2 Blackcap, but it was a bit too sunny for catching birds at this site (plenty of cloud, but in the wrong place!) 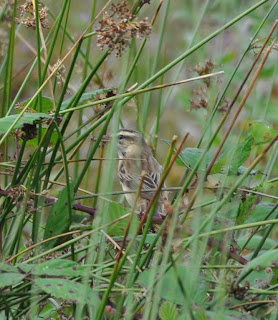 Most of the Sedge Warblers have left Middleton although you sometimes get small arrivals of presumed Scottish migrants in early September (and there are still plenty at Leighton Moss).  Thanks Janet
Ocean Edge/outfalls at low tide
Med Gull - juvenile