Kittiwake famine is over 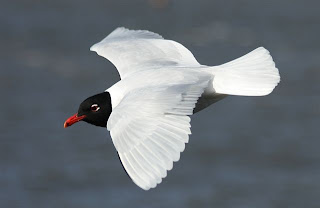 The apparantly paired-up passage Med Gulls which spent a short time along the north wall - the male is the upper bird.  Thanks to Mike Baron
Heysham Obs
Its been a great winter for people responsible for checking freight on ferries at Heysham port for storm damage.  For the same reason, it has been an excellent winter for birds which dont want to be blown into or diverted into Morecambe Bay.  Not quite so good for 'year-ticking' Kittiwake, with even the seductive entrails of the midday Isle of Man ferry drawing a blank.   An initially boring seawatch in good visibility was enlivened by a tight synchronous flock with flashing white underwings...

North wall 0900-1000ish
Kittiwake - flock of 8 in, then landed, then out & c16, presumably all this species, but flocks can get joined by migrant Common Gulls, on the sea mid pm
Meadow Pipit - 2+5+1+1+1+1 north
Red-throated Diver - 2 on the sea
Purple Sandpiper - 2 on the wooden jetty
Twite - 44 with 5 unringed
Med Gull - 2 ads: one full summer and one partial summer bird along the north wall - neither ringed and the partial summer bird definitely not one of the regulars on bill pattern (none seen earlier this week)

Dogwatch  1125-1145
20 minutes observing dogwalkers from the Heysham NR office window produced the following dog-related sightings (please bear in mind a large off-lead area is provided):
1) A couple in a red volvo - two off-lead dogs running around the reserve, did at least put waste bag in bin
2) Single male with dog walking in from Moneyclose Lane, straight over the dipping pond stile on to the reserve, no lead, lively dog all 'over the place'
3) Single female walking in using the same stile - more sedate dog off the lead, remained near owner during period observed
4) Couple returning from the off-lead area with two lively off-lead dogs well ahead of them.  These went through the fence, on to the reserve and did a tour of the classroom area before their owners arrived back to the off-lead gate.  Returned to car.

Therefore in twenty minutes, none of the dog owners observed took a bit of notice of carefully worded, conciliatory but not over-fussy, signs