Heysham Obs
This morning was all about hard work and ekeing as much as possible out of some dodgy weather, including some ringing at the two sites, checking moths and completing the WeBS count.  The forecast suggested that Middleton would be possible early on providing it was not already raining!   However, a significant number of warblers (yesterday) and the Greenfinch hordes also suggested a ringing session by the office at HNR was on the cards.............all before the deteriorating weather.  Thanks to John and Jean for help - it would have been too risky for a single ringer this morning

Middleton NR 0530-0800
This visit revealed that the vast majority of the Sedge Warblers had moved on and, as the tit flocks are still stubbornly absent (and therefore also the entourage of off-passage warblers), this left a bit of a void with a few odds and ends of migrants in the nets before the wind put paid to proceedings
Tree Pipit - one flew south at some unearthly hour
Tree Sparrow - one around
Sedge Warbler - probably no more than four birds encountered with an unringed adult the only capture
Reed Warbler - at least one in the central marsh reedbed and a juvenile retrapped
Garden Warbler - two ringed (do not breed in Heysham area)
Willow Warbler - a trickle around with three ringed
Grasshopper Warbler - two singing males first thing, then no obvious sign
Chiffchaff - two ringed
Blackcap - one ringed
Lesser Whitethroat - one ringed

Gulls
I was shocked to find that more gulls had successfully nested on roofs in the Heysham area than on South Walney - the Walney Obs blogsite (as well as indicating more skuas flew out of the Bay yesterday!) revealing a total breeding failure

Mystery pic from Janet - how many species involved here! 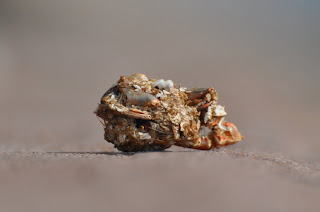