The float-in and the fly-by

The early morning mist was a bit on the thick side so visibility was compromised but not so badly that seawatching couldn't be carried out. The sea was like a mill pond so anything floating in at yellow buoy range was easy to see.

North Harbour Wall 0730-1030  Weather: SE F1. 8-13C
Sandwich Terns - c30 were milling about along the low tide channel and sitting on the buoys throughout the watch.
Arctic Tern - 14 in one flock headed into the Bay
Eider - 75 in the low tide channel
Great-crested Grebe - 5 (2 displaying pairs and a singleton)
Guillemot - 15 floated in at 09:30 in small groups
Black Guillemot - 1 in summer plumage with one of the Guillemot groups and was seen on and off (i.e. on top of then under the water) from 10:00 to 10:15. At 10:15 the sea mist cleared and the Guillemots cleared off north westwards.
Shag - 2CY on the wooden jetty as usual
Swallow - 4 north
A mixed flock of Dunlin and Ringed Plover flew overhead.

Meanwhile back at Heysham Nature Reserve:
Farmyard goose  - 1 white individual morphed from a lowly hybrid goose into a migrant goose and flew NE at 08:50
Hobby - 1 flew SE-NW at 09:02 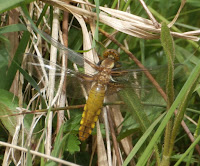 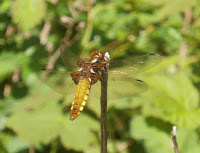 The two mute on the main pond have abandoned their nest, which is now empty. There was no sign of human trampling close by so this was probably the nest predated by the fox.
The good news is that the Broad bodied Chasers are emerging. One near the largest new scrape was still pumping up its forewings (see first pic). Three others were flying in the sheltered strip to east of golf club. 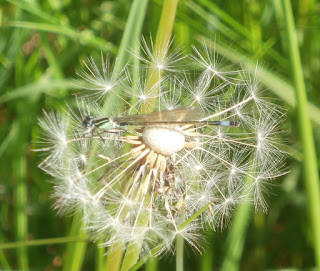 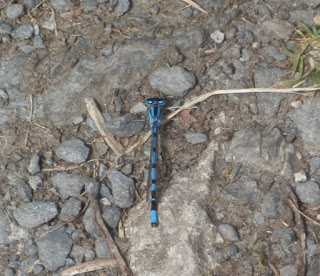