Heysham Obs
As suspected, the best winds for us were during the night and the day dawned with winds which were just too far round to the north-west at WWNW (despite assertions on all forecasts that it was "west").  Seawatching therefore a waste of time unless you are into Shelduck passage.  However, its supposed to go more west or even WSW prior to the afternoon frontal system...........but there is no tide.  After the front, firmly in the north-west 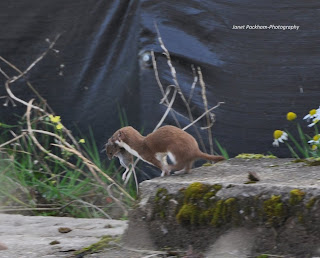 One of an excellent sequence taken by Janet on Middleton NR
Posted by Pete Marsh at 09:50 No comments: