Bits and bobs on the coastal front 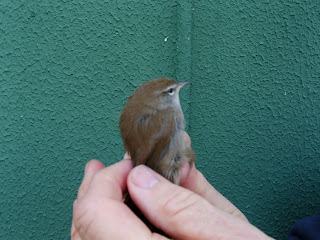 Saturday's Cetti's Warbler, hopefully still skulking in the main wetland area (thanks Emma)﻿
A Python-like 'now for something completely different' this morning with no vis mig coverage (lie-in) or ringing etc.  The wind is back in the south-west and intertidal work beckoned.  Well and truly gripped off by Hilbre in the meantime...........but we were short of a decent foot-slogger hitting the early morning nooks and crannies whilst we carried out the ringing/vis mig stuff.  Can't moan about the Cetti's & above is another picture: