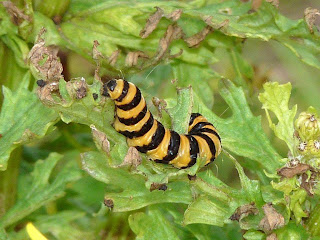 Latish Cinnabar caterpillar.  Thanks Janet
Heysham Obs
After a clear, starry, fullish moon night, not a lot of night migrants were expected but conditions were perfect for ringing and especially early morning vis mig.  So time to kickstart the Grey Wagtail study.
Heysham office area revealed a predictable lack of night migrants, although two Blackcap and a Willow Warbler were ringed, but Middleton was rather strange and much better than expected in this category:
Grasshopper Warbler - three (oldish) 1CY trapped in the western marsh near to where there was a singing male last night (heard during moth trapping event) of which there was no sight/sound this morning!   Were these migrants grounded during the night by the song?  These are the latest ever to be ringed here.
Reed Warbler - migrant 1CY ringed (no local birds left)
Sedge Warbler - no sign of any
Lesser Whitethroat - 4 1CY ringed
Whitethroat - fully moulted adult male & 1CY ringed
Willow warbler - 3 ringed (& one HNR)
Chiffchaff - 2 ringed & a few others calling in the sewage works screening planting
Blackcap - 3 1CY ringed (& 2 HNR)
Tree Pipit - one escaped from a mist net whilst extracting a large tit flock (you are supposed to get these out first!)
Shoveler - female/imm escaped from the top shelf of a mist net!!!!! [rare here].  This is the third duck species to escape from the top shelf of this particular mist net this year (Tufted & Mallard being the other two!)

Mammals
A group of four Foxes seen at 08.00 roaming on the Reserve plateau area. Most likely the same family, including three cubs, seen close to the Hut some while ago.

Meadow Pipit - 4 SE
Tit species - a veritable 'plague' from about 1000hrs leading to the best net at Middleton being closed to avoid wholesale recaptures.   These made a major contribition to about 100 extractions today, with 54 of these not already bearing a ring.  The Long-tailed Tit flocks were a complete mixture of older-ringed/more recently ringed and 'new' birds, but at least one of the Blue Tit flocks consisted wholly of unringed birds.  7 unringed Great Tit during one ringing session is a high number for this site.  Two of the retrap Great Tits were from the HNR nestbox scheme.
Outfalls 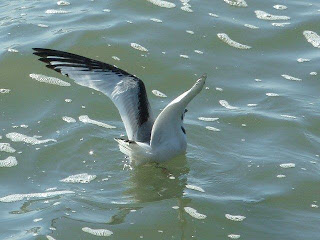 At least one Kittiwake on the outfalls - thanks Janet
Posted by Pete Marsh at 14:33 No comments: