Bit of a fall

Heysham Obs
Just put one net up this am for Grey Wagtail as it seemed too windy for the full works.  Wind dropped, cloud increased - no Grey Wagtail but Reed Warbler, 3 x Willow Warbler, Chiffchaff, Robin and this female Firecrest on the first round:  Thanks to Steve Ryder for the pic: 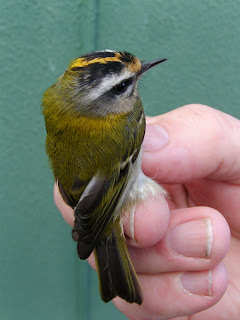 Grounded office area am
Pied Flycatcher - female/imm in trees along the top path by the pylons 0900, calling regularly but not seen 1015
Firecrest - female caught and ringed 0700hrs
Goldcrest - at least 5 - 2 ringed
Willow warbler - 4 ringed
Chiffchaff - 3 ringed, at least two others
Robin - two migrants ringed, at least 5 others (more nets would have shown this)
Blackcap - two, one ringed
Whitethroat - 1 ringed
Reed Warbler - 1 ringed
Dunnock - I ringed
Vis mig on and off 0700-0900
Meadow Pipit - 75 SE, probably more
Merlin - female south
Chaffinch  - 7 south
alba Wagtail - 12 south-east
Grey Wagtail - just the one heard way over golf course
Reed Bunting - 1 SE
Siskin - heard once
Middleton pm
Went to see if the Swallow roost was still extant after reports of just 4 leaving it the other morning.  It was with c80-100 birds involved.  On my own so tape switched off before dusk.
Reed Warbler - two juveniles ringed in early September retrapped
Grasshopper Warbler - juvenile caught in the middle of the Swallow roost!
Sand Martin - two caught at the roost - one bearing a ring from elsewhere (Z419xxx)
Swallow - 46 ringed (two adults)
Water Rail - at least two in western marsh reedbed
Chiffchaff - at least three
﻿
Posted by Pete Marsh at 08:27 No comments: