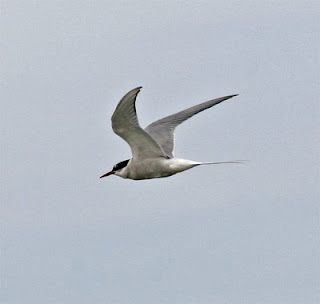 The now 'long-staying' Ad Arctic Tern photographed yesterday by Mike Watson. Thanks for this, Mike.

Heysham Obs
Nothing mind-boggling but a fair selection of birds. Today was in the top ten of personal 'best days birding in this area' but this was mainly due to discoveries elsewhere (see below)

Elsewhere
Yes!!! Yellow-browed Warbler with a Long-tailed Tit-based flock near Botton Mill 1440-1450 (intermittently), then headed towards Stairend bridge before heading down the west side of the Hindburn valley [terrain too uneven to keep up with flock]. Just one call attributable to this bird, but it was a bright individual with broad tertial fringes and eliminating Hume's Warbler was not a problem. Also 30 Redwing and a single flock of 44 Siskin in this area, but Thrushgill plantation appeared rather dead and coneless. No further sign of this flock in the next 3.5 hours. Early-morning two hour vis mig session on Caton Moor was reasonably good and highlighted by Snow Bunting (0837hrs) and Rock Pipit (0914hrs) - both SW. Nothing at Leighton Moss other than huge numbers of people & single lingering Little Stint and Curlew Sandpiper on the EM Pool & Marsh Harrier on the main reserve, but no-one "interpreting the pager news" & checking the slag tips for Lap/Snow Bs.. Late Garden Warbler Freeman's Wood area. Anyone else do moorland edge vis this morning (where it was clear c/p coast)?
Posted by Pete Marsh at 12:00