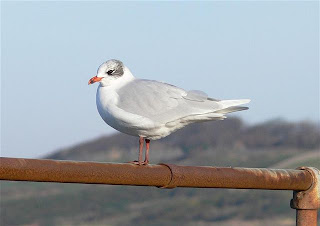 Ad Med on the NHW railings this afternoon. Thanks Gavin.

Heysham Obs
North harbour wall
Red-throated Diver - one in, one close inshore
Med Gull - two adults around
Pink-footed Goose - 120 north then back south
Twite - 19 in afternoon, one with autumn 2004 ring (Ocean Edge birds - see below?)
Linnet - 3 (getting late for this species in this area)

Elsewhere
One Cattle Egret left the Leighton Moss roost this morning at 0745hrs. It was not possible to view the roost last night due to fog and anything roosting there would have required sophisticated homing instincts. This bird flew north, not the direction of the two previously presumed Cattle Egret, which was NE. NO Cattle Egrets located feeding anywhere today & no egrets arriving from the north into the Leighton Moss roost this evening (c20 Little Egret). Waxwings have been present at Black Dyke Road, Arnside all week and comprised 28 today. Early morning report of Waxwings from Booths at Carnforth, but nothing since. The Rough-legged Buzzard reportedly showed to a select few at various parts of Leighton Moss today. Wintering Common Sandpiper still in Conder area. 26 Waxwings flew over Galgate. 3 Scaup close inshore at Teal Bay at high tide & female Scaup remains at Freemans Pool. 46 Twite Bank End with many bearing autumn 2008 Heysham rings
Posted by Pete Marsh at 11:55