A decent catch of moths last night as the ideal pre-rain warm sector 'leading' cloud cover lasted well into the night and not unusually producing a wet trap check this morning.  50 species in actinic Middleton in sharp contrast to the meagre fare in the clear polar air on Monday night.  This is the hoped for target at this time of year: Silver Hook - a very localised species in damp areas at/near the coast in Lancs 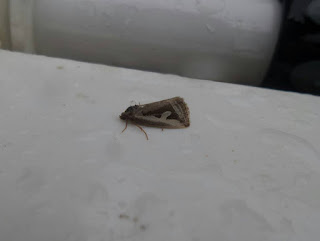 A wet record shot in situ - thanks Justine

Outfalls
A low tide check saw a 2CY Little Gull in the shipping channel off Heysham 2 outfall and about 5 Ad/3CY Meds flying around the seaward end of the outfalls, but the later count was thwarted by a mutt clearing all the gulls off Red Nab and nearby shore on the incoming tide but at the same time there seemed to be a big reduction of stuff on the outfalls

Heysham skeer
Little Egret - at least 16 (per Malcolm) but no sign of the 200 Eiders at low tide which had floated in the JB Point at high tide yesterday
Posted by Pete Marsh at 22:54 No comments: