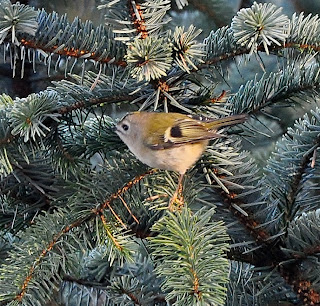 North harbour wall/wooden jetty (not a full count)
Purple Sandpiper - one, looked like adult, but distant
Turnstone - 33
Med Gull - 2 adults (one Czech-ringed) with no sign of 1CY
Twite - 23 - not on seed; too much activity in the Centrica compound (14.00 - 12 on seed, of which 3 unringed. ajd)
Nothing of interest seen on the distant parts of the sea

A short tour of the Kingsway & new estate in the NE sector of the recording area (46A) failed to reveal any Waxwings (see late posting for yesterday)
Posted by Pete Marsh at 12:38 No comments: