Yesterdays Swallow roost ringing
Sunday evening's session at Middleton NR was pre-roost and another session yesterday evening led to a further 85 Swallow and one Sand Martin being ringed out of about 250 roosting in a nearby reedbed.  In addition, there was a Swallow bearing a brand new ring from elsewhere - Y519776. 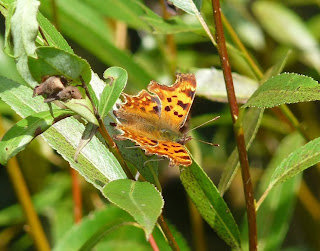 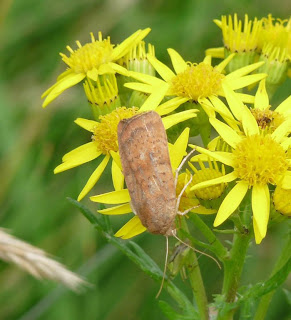 Comma have not been particularly common this year and Least Yellow Underwing is a regular day-time flier, usually seen whizzing about rather than quietly nectaring like this individual.  Thanks Janet.

Moths
Todays catch was large and typically dominated by Sallow, Flounced Rustic, Square Spot Rustic and the 'back-end' of the Six-striped Rustic emergence.  The other two 'plague species' at this time of year are never common in this trap (Large Yellow Underwing) and are having a bad year (Common Rustic (agg)).  Highlights were a late Grass Emerald, Agriphila latistria (3), Cochylis dubitana, Dusky Plume (Oidaematophrus lithodactyla) and Ambtyptilia acanthadactyla