After morning murk drops passerines, the Manx passenger ferry does the trick 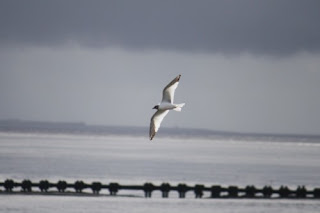 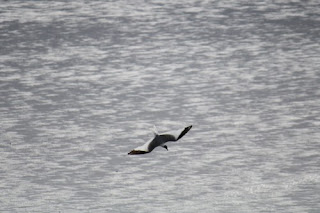 Thanks to Pete Cook for these atmospheric shots
Heysham Obs
After a morning of poor visibility, the wind perked up and the Sabine's Gull appeared behind the Isle of Man ferry with about 20 Kittiwakes at 1215hrs and headed towards the outfalls along the wooden jetty where it had apparently been watched for 'some time' before joining the ferry throng.  If this was the case and the observers concerned do not have the RBA number, here it is: 02070382820 (text).  Unfortunately conditions were fairly 'quiet' and it drifted down the Heysham one outfall feeding channel until out of sight.  The next ferry is 5-ish

Passerines in coastal nooks and crannies in the murky drizzle this morning with evidence that birds had come in-off with four Chiffchaff and 5 Wheatear (north harbour wall) along with a probable Blackcap seen in flight and the afternoon produced a lingering Spotted Flycatcher along the south quay along with another two Wheatear and phyllosc spp.   Ocean Edge foreshore saw 3 further Wheatear and a trickle of Meadow Pipit coming 'in-off' (6 in 45mins!) to join the 15 or so grounded ones

Inshore sightings maxima - not all at same time with many terns departing over the high tide
Arctic Tern - 8 juvs, 2 adults
Common Tern - adult & 2 juvs
Little Gull - 2CY (still 2 old primaries left) and Ad
Kittiwake - one flew 'out' then c20 behind the IOM ferry, all but 3 juvs
Sabine's Gull - apparently seen from mid-morning but this is second-hand info.  Certainly seen before it joined the ferry throng 'going backwards and forwards', then returned along the wooden jetty before disappearing offshore again about 1300hrs.  Next ferry is 5pm-ish.  No known further sightings, but there could be a few more of them on Monday/Tuesday (shades of 14/9/87)!!
Sandwich tern - one
Med Gull - at least 8 1CY, 2 2CY and 4 adult

Grounded migrants
Spotted Flycatcher - one south wall area
Chiffchaff - at least 6 along the coastal fringe and 5+ on HN reserve (3 ringed)
Whitethroat - two by HNR office (one ringed)
Wheatear - c22 around
Blackcap - one by office, one probable NH wall, one HNR
Lesser Whitethroat - one in tank farm