One loaf and five fishes?

The 3rd W Iceland Gull was at the waterfall this morning eating fish and other maritime bits and bobs, but a whole loaf of mothers pride type stuff finally tempted it within range for Janet's pics at the Middleton model boat pond this afternoon where it had been bathing and resting on the last remaining ice.  Thanks Janet. 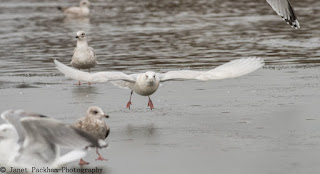 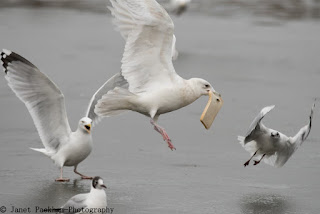 Stonechat - male and female in the corner of OE saltmarsh
Rock Pipit - singles Red Nab and the end of the north wall
Skylark - 5 SE during the morning
Wigeon - 311 (Red Nab flock)
Turnstone - 74 wooden jetty, c10 heliport
Jack Snipe - one heliport flew down on to rocks
Snipe - minimum of 5 heliport
Chough - second field when looked for on and off
Shag - juvenile on wooden jetty at HT

Two ringed Herring Gull read on the ice at Middleton.  This 3CY is probably from York but haven't had it confirmed yet - note the Iceland Gull next to it.  Thanks Janet. 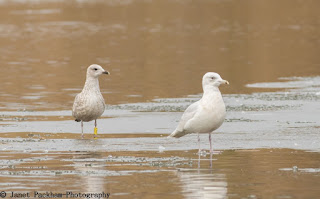