Heysham Obs
Nice pic by Janet of a Peacock on buddleia followed by a Small Copper on ragwort this afternoon.  I planted the buddlieas by the office about a couple of millenia ago and every year they attract large numbers of butterflies which are enjoyed by many people.  Should they, however, be part of a nature reserve?  Unlike a certain large reserve in the north of the county, they are politically correctly kept out of the butterfly transect, so no "artificial" bolstering of numbers here.  Ragwort is a real dilemma.  There is a stables nearby - enough said - and in order to sell the baled hay from the biannual mowing regime to help fund on-going management work, its got to be ragwort-free.  So there is some selective removal on the reserve.

The problem is that, along with the oft-quoted and obvious Cinnabar moth, there are many others whose larvae feed on ragwort, including two regulars in the moth trap, Cochylis atricapitana and the misleadingly named Golden-rod Pug.  As can be seen from the pic, it is also a valuable nectar source, especially late in the autumn. 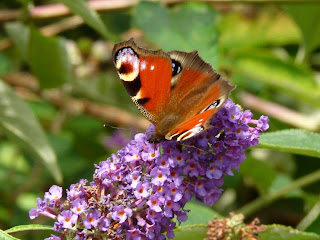 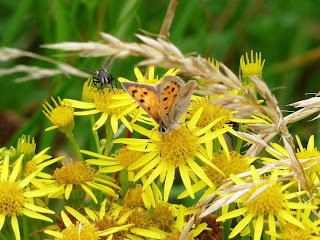 Moth trap
Another good catch including Ypsophola scabrella and a large plume moth of very localised (northern) distribution with a ridiculously long name -Oidaematophorus lithodactyla
Posted by Pete Marsh at 17:42 No comments: