First Cetti's singing, plus an irregular, albeit symmetrical, visitor.

Lightish west wind drifting to WNW by evening. High cloud all day with plenty of sunshine.
South shore (SC, MD)
Late morning towards high water.
Pale-bellied Brent geese none on this visit and an evening check of the skear. But later on the ebbing tide Shaun saw 31 fly from Sunderland Point towards Red Nab.
Shelduck 19
Wigeon 200+
Rock Pipit 7 at least, there were 5 arguing and displaying around the lighthouse, no sign of the ringed male, perhaps his territory is up for grabs. 2 more together on saltmarsh 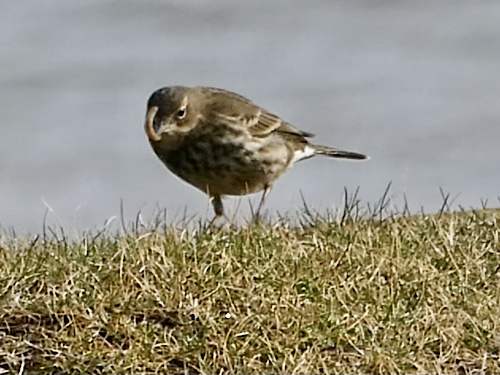 Turnstone 150 flew from north side to roost on the wooden jetty.
Shag 1 2nd calendar year preening on the wooden jetty (located by Shaun). The picture below is just a record shot, the arrow on the picture above shows it's location on the wooden jetty.
By the time we got to the saltmarsh it was 75% covered. After they have been flushed a couple of times by the spring tides, the Jack Snipe tend to move off when the water reaches them, rather than be pushed to the edges. So we probably missed some. Even so
Common Snipe 2
Jack Snipe 2
Reed Bunting 4 (2+2)
Middleton Nature Reserve (SC)
Cetti's Warbler 2 singing in the central marshes - first records of them singing this year

Adult Mute Swan on Tim Butler's. Plus 2 pairs of adults and a single adult on Boating Lake + 7 juvs Red-breasted Merganser 12 (one group of 6 plus 3 x 2)
Great Crested Grebe 2
Finally, the irregular visitor. This is only the third time I've found one at Heysham, and only the second on the skear, but each on an ebbing spring tide.
Curled (lesser) Octopus 1 - not Common Octopus as I originally posted. Linda Renshaw pointed out that the common octopus has double rows of suckers on the tentacles, not a single row that this one has. I would have checked, but hadn't realised that there was more than one UK species - thanks Linda (MD)
But strangely, its tracks were leading away from the nearest water. I was going to film it "walking", but as soon as I started filming, it became obvious that it was in distress.
So I picked it up to take to a pool deep enough to not to drain before low water. As soon as I picked it up it wrapped its tentacles backwards around my hand. I took this quick clip, hoping to be able to show you its beak, but it was tucked into its mouth.
As soon as I placed it in a suitable pool it shot off, leaving me a pool of ink as a thank you.
But it didn't go far, in this clip you can see it in a classical rest pose. Its colour changes during this clip to allow a better match to the beach. Don't worry about the pink tendril floating past, I don't know what it was, but it was nothing to do with the Octopus, which escaped intact.
Sorry about the heavy breathing on this clip, but I had to move quickly over 50m before I found this pool that I was sure wouldn't drain before low water.
Posted by Pete Marsh at 21:27 No comments: