Good start then blocking low cloud in the mouth of the bay, improvement in the afternoon

Heysham Obs
Three species of skua in the first 15-20 minutes, then after about an hour conditions went a bit pear-shaped with lingering low cloud in the mouth of the bay.  Observations from the mouth of the bay suggest that an earlier start would have been a good idea!  A 1st summer Great Northern Diver on the sea was a nice bonus but an absolute pain to keep track of as it stayed under for up to 2 minutes!

North wall 0725-up to 1830 intermittently
Great Northern Diver -  1st summer on the sea, actively feeding c0800-0815hrs, then presumed to have gradually headed in with the tidal flow
Pomarine Skua -adult light morph in at 0742 and showing really well as it chased an adult Lesser Black-backed Gull, another fairly close light morph in late afternoon
Arctic Skua - dark morphs in in quick succession 0731 & 0734, then one dark morph in at c0935hrs
Bonxie  one in beyond the sandbank, then on 0738
Skua spp - one very distant 0815 prob a dark Arctic, flock of 5 including at least one light morph (prob Poms), again very distant, in, then apparently on at c0830
Kittiwake - flock of 55 adults in, usual 2CY outfalls, flock of 40 adults out then on early evening
Razorbill - one out, then on 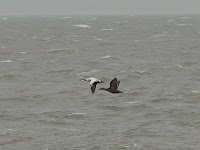 Sandwich Tern - c30 out
Arctic Tern - 2 in
Common Scoter - c15 in
Gannet - at least 30 including flock of 6
Little Gull - ad & 2CY out early afternoon (thanks Andy)
Male and female Eider this afternoon off north wall.(Janet)
Manx Shearwater - at least 33
Fulmar - 1

Gulls
Loads of them on the skeers and nearby mudflats (& 650 roosting on Fisher's roof) mainly immatures and mostly 2CY Herring.  c1,250 in a single sweep off the north harbour wall at low tide this evening - the biggest concentration of large gulls I've seen in this area since the rubbish tip days