Pale-bellied Brent goose - 09:15 the two Canadian ringed birds were feeding in the SE corner of sheer, again accompanied by 4 juvenile birds. They are certainly behaving like a family group (MD).

Another two were feeding further along the skeer edge. 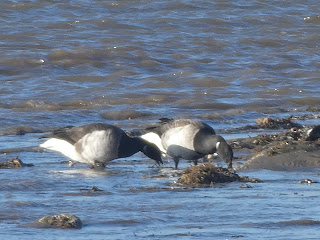 There is no growing weed here, the birds seemed to be eating the broken weed on the incoming tide line.

All 8 got together in the corner when the areas they had been feeding on were covered by the tide. 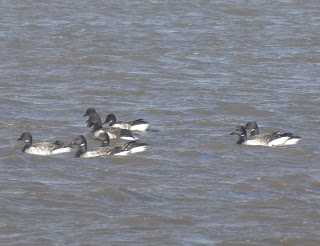 Presumably after that they moved to the children's play area then on to Red Nab to feed. But no reports from these areas as yet.

15:30 8 (presumably same birds) flew back to north side past the south wall roundhead on the ebb tide

Just a glimpse of the number of birds feeding on the flood tide on the beach south of skeer. 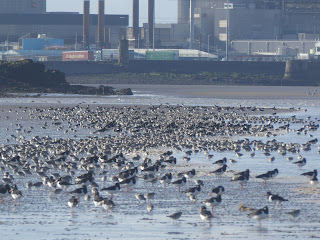