Eyes to the sea - but you have to look a long way!

The wind started off due E then moved around to SE then finally S. Overcast at first, rain in the afternoon followed by a sunny evening.
Observations restricted to four one hour observations by different observers. Early and mid morning, early afternoon and evening.
There were birds to be seen, but many were at the limits of observation.

Sandwich Tern 1 in
Arctic Tern - tight flock of 36 SE into the wind early afternoon, plus 1 and 1 in.
Gannet 24 in 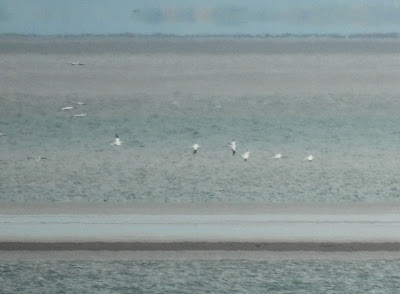 Fortunately some of the Ganets came in closer, but still quite a distance. This picture from Kevin.

Arctic Skua - flock of 4 dark morph birds in
Common Scoter 5 out plus 2 flying between inner and outer channels
Shag 1 2nd calendar year bird flew east accross the bay then veered south towards the harbour entrance
Red-Throated diver 1 out
Whimbrel at least 22, some feeding some in.