Great day after a slow start

Usually migration weather is all about a dawn start on the west coast and take it from there.  A routine bit of coverage say for 2-3 hours from dawn today would have labelled the morning as 'duff' apart from the lingering Sabine's Gull.  Then the wind started to kick in a bit........  My personal day's birding included finding and seeing just two warblers - two Yellow-browed - and I even turned down the chance of seeing the Middleton bird in the hand.  How times have changed with this species! Thanks to Jean Roberts for the YBW pic and Mark Breaks for the Brents (there were seven!) and Sabines Gull pics 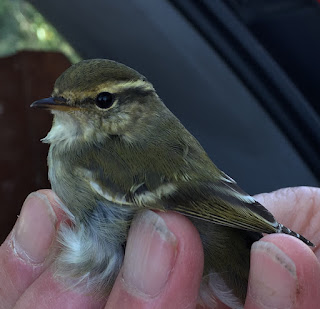 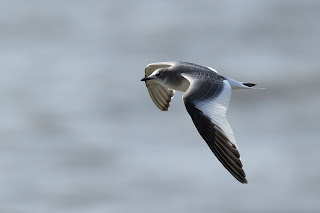 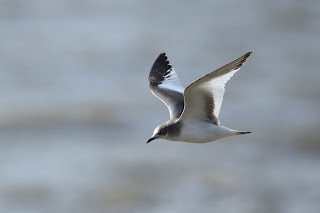 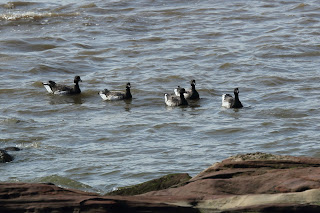 Highlights
Sabine's Gull - still on outfalls until at least high tide
Yellow-browed Warbler - Three in the recording area and one just to the south.  Noisy one located by HNR entrance road mid-am which flew towards dipping pond mid-morning and left messing about in the willows on the north side. It or another was seen in the same area by Gav Thomas c1715hrs.  Then decided to work Heysham Head before the wind got up (needed a cup of coffee!) and after doing the churchyard area walked back towards the car and one started calling above about 1015ish.  Incredibly hyperactive and noisy and flew across the rectory garden before flying back across to the ivy covered wall, then back up into the canopy.  After a final call from the canopy at the back of the Rectory garden one more time, it was not seen again and must have moved on avoiding the Long-tailed Tit flock.  Then at 1130 one was caught and ringed at Middleton NR and released by the 'no swimming pond' next to the model boat pond.  One was located just to the south of the recording area along the Potts Corner road late afternoon (unringed) [and one further south still by Sunderland toilet block]
Pale-bellied Brent Goose - the flock of seven located by Gav Thomas two days ago at Plover Scar appeared on Red Nab and logically yesterdays distant skeer sighting was of the only two visible birds on a skeer with a 'far side slope'
Stonechat - male near Heysham NR office then on to tank farm
Nuthatch - one Heysham Head