A visit from Merlin

It was a very mild day (15C) with thick cloud, apparently full of dust from the Sahara, and a force 4 wind from the SW. Disappointingly for National Moth Weekend there were no moths in the trap at Heysham but there is another night to go. At least 4 Goldcrests could be heard below the obs tower where it was relatively sheltered so I put a few nets up to try and catch them and in the hope of catching a Yellow-browed Warbler. Sadly, the latter species was still not around, nor any other warblers. 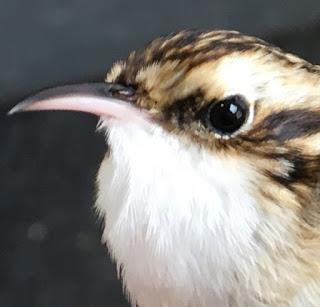 The Goldcrest that has been around for a month was lighter in weight than the new birds (5.3grams cf 5.7 or 5.8 grams). Whether this means the heavier birds are about to migrate and the lighter bird is going to stick around longer, I don't know but it was interesting to note the difference. All the Goldcrests were males. The average weight for a Goldcrest is 5g (same as a 20p coin) and the heaviest weight is 6g (just less than a 10p coin).

The Long-tailed Tits were heavier than average as well, the lightest was 8g (same as a 50p coin) and the heaviest was 8.6g compared to the average of 7g (per BTO data).

Ocean Edge
A Merlin paid a visit to the saltmarsh and perched on some driftwood for a while, no doubt hoping to catch one of the gang of 25 Linnets that frequent the marsh or perhaps a Meadow Pipit.