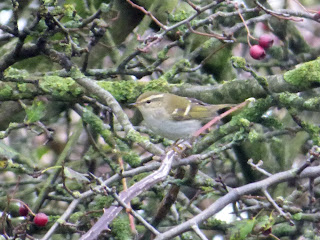 Thanks Dan
The first one was in the moth trap at nearby Sunderland Point (a Gem) and the second was heard as I was getting out of the car at Heysham NR office - a vocal Yellow-browed Warbler.  Just occasionally birding is easy!

Grounded
Goldcrest - at least 20
Song Thrush - c15
Redwing - c5
Chiffchaff - one by office, one in what has been christened (not by me) 'chavvy scrub' by half moon bay
Stonechat - two by half moon bay then on to heliport area
Yellow-browed Warbler - one by office from early pm to at least 5pm and, unless it got away in the first hour of darkness, probably going nowhere for a day or two
Water Rail - three calling from scattered locations away from usual areas at Middleton
Blackcap - female by office with tit flock

More odds and ends to come