First, these wonderful images of two of the Jack Snipe seen and photographed by Graham Hulme on Monday, on the saltmarsh. You really have to open these images to see the fantastic detail. 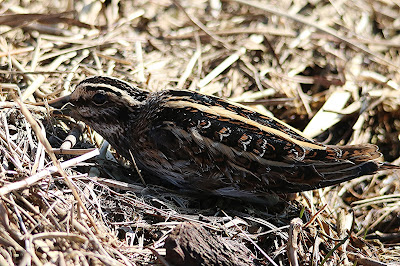 Thanks for Graham for allowing the use of these pictures and to David Talbot who forwarded them together with this summary of how Graham took them:

They remained on the marsh right up to high tide (9.7m) but here’s the thing, he was able to walk right up to them floating on the flotsam in the corner. He got as close as 1 metre and even said he felt he could have picked them up! He got the attached photos from point blank range and he said it was clear the birds were watching him.

Today - not a lot so far
South shore
Rock Pipits 3 (1 each, foreshore, Red Nab and lighthouse)
Janet took this shot of the Black-Headed gulls roosting in the harbour (nothing on the outflow structure again, despite no wind).
When it's calm like it has been this week, there are only a few shallow waves and the normally characteristic ripples in the mud are not formed. Instead each tide leaves a thin deposit of fine silt on the surface. Leaving it both smooth and slippy!
These "ripples" have not been formed by the tide, but by Shelduck feeding after the tide has left the mud. There must have been invertebrates in the thin top layer, almost certainly small shrimps. This is the same area of beach where the gulls were paddling for shrimps (see post 15/02/21)