Heysham Obs
Maybe some of the redpolls are getting wise to people trying to catch them as they move up the country and they failed to enter the (albeit 'suntanned' and visible) nets again this morning.  For the last two mornings. there has been at least one bird per flock acting as though it knew the score and dragging the rest of the group off to the north after a brief rest and chat at the top of a bush.  Therefore ringing has been limited to the occasional singleton.  The morning was a "bonus" of another still and sunny first three hours or so before the forecasted west-north-west wind kicked in.  The only evidence of a night migrant was a female Blackcap which unexpectedly appeared in the mist net

North harbour wall
No Twite, just 6 Linnet.  Immature Peregrine successfully caught a Turnstone and flew off out to sea with it!

Grounded
Blackcap - one female ringed with zero fat and a weight of 16.9g
The only other ringing comprised 2 Lesser Redpoll, 3 Goldfinch and a Chaffinch

Birds ringed elsewhere comprised Reed Bunting (from Walney), Meadow Pipit (as yet unknown origin British) and Lesser Redpoll (unknown origin French), Shag (from Puffin Island, Anglesey) and the returning wintering Czech-ringed Med Gull which departed for its unknown breeding site on 29th February.  The wintering Twite ringed at Machrihanish Seabird Observatory (Mull of Kintyre) in autumn 2011 was also re-caught during March.  It may also prove possible to trace the origin of the Lesser Redpoll with a 'closed' aviculture ring!  One of the Blue Tits was caught a day or so later at Brookhouse in the Lune valley - an established pattern of spring movement in this area. 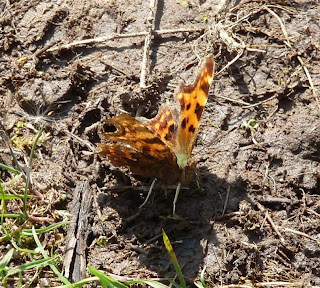