Brent geese:
Thursday - out from children's play area (PW)
Pale-bellied Brent 60
Dark- bellied Brent 1
They flew south at 12:50 and all 61 birds were relocated on Red Nab. Later joined by an additional 2 pb (MD & PW).
They flew off in the direction of Pott's corner at 13:40 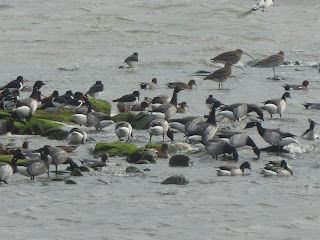 If not disturbed, the geese provide a good show close in to the sea wall at Red Nab.

Tomorrow's tide might just be high enough for them to feed at Red Nab, after that, diminishing tide height means that they are unlikely to be flushed from the children's play area (at least by the tide) for over a week.

Wednesday - out from the children's play area (MD)
Pale-bellied Brent 82
Dark- bellied Brent 1
There could easily have been more, accurate counting is difficult when they are feeding amongst the rocks. 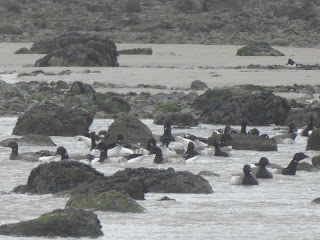 They feed here long before the water reaches the rocks, but when it does activity is frenzied!