A Little Tern heading into the Bay with bouts of hovering was the stand-out from an otherwise fruitless early start although an 'owl', thought to be small, in poor light below the old observation tower could have done with being specified as there are no resident species there.  Intensive searching failed to relocate but the back-only views suggested a rounded earless head as it shuffled along a branch out of sight before definitely leaving that area

This pic sums up the morning - one of those where it was difficult to focus the scope with a flat calm featureless murky sea and faint Cumbrian outline.  Used the yellow buoy and here is the best of the rest after the Little Tern; Sandwich Terns and a Grey Seal floating past! 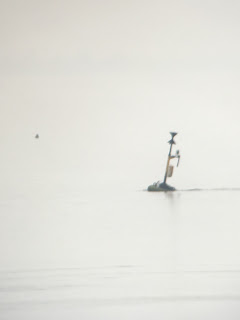 Sandwich Tern - 30-35, mainly blogging
Little Tern - one 'in' about twice as far out as the yellow buoys
Red-throated Diver - sp on - floating in
Whimbrel - 4 in and heard from OE saltmarsh creek
Wheatear - one big and one very big male OE grassland plus three others
Linnet - 21
Guillemot - still in harbour

Very little ringed - the hoped for fall not materialising - the office produced Sedge & Willow Warbler, Chiffchaff and Whitethroat in conditions which were watched carefully but ok.....which it certainly wasn't just south and west.  Then four migrant Lesser Whitethroat were found in the net together and these were the last birds in the nets

Grey Seal - one - same as yesterday 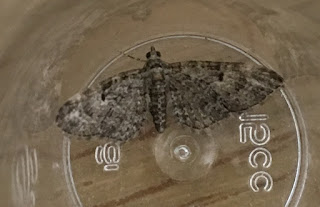 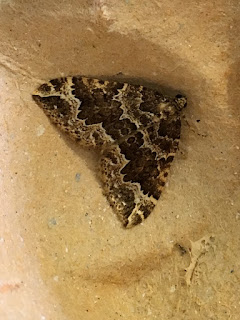