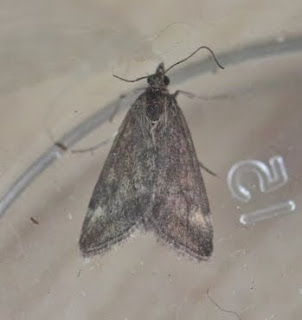 Pyrausta despicata - thanks John
Heysham Obs
The final session of sorting out the LDBWS report for the printers this morning was multitasked with some ringing by the office and checking half the moth trap before John Girdley arrived in time to target the egg-cases as opposed to the walls.  The moth trap saw a deja-vu with a species I was tripping over earlier this year whilst working in Kent but which was only the seventh VC60 record and the second for Heysham NR - Pyrausta despicata

Ringing
Low-key effort next to the office produced a sprinkling of 'new' warblers, including both Whitethroats, a Great-spotted Woodpecker and further evidence that it has been an excellent breeding season for Greenfinch and that the birds are mostly passing through with 34, almost all juveniles, caught this last three weeks with very few retraps

Moths
See above, plus the usual variety of the less-common species including Dingy Footman,  Dingy Shears, Barred Rivulet and Southern Wainscot

Butterflies
The first two Red Admiral seen in the area for quite some time on the office buddleia - looked newly emerged.

Elsewhere
Yellow-legged Gull Glasson and up to 6 Meds in coastal north Fylde
Posted by Pete Marsh at 12:04 No comments: