The wind, again, fails to provide

The strong SSW to WSW winds continued, but easing during the day. Some sunny spells and light showers.

South shore - mid morning (MD)
There were 75 gulls roosting on the mud out from Ocean Edge saltmarsh (this area of beach does not get covered by these neap tides). Most were Black-Headed gulls, but at least one was a Mediterranean gull, probably 2.
A juvenile Med was seen out from the harbour mouth, the roosting gulls on Red Nab were not checked.
Meadow Pipit 3 grounded
Rock Pipit 2 + 1
Wheatear 1
Shelduck - these were the only birds seen to be moving around.
10 on the Beach
3 and 6 flying north
12 and 6 flying south 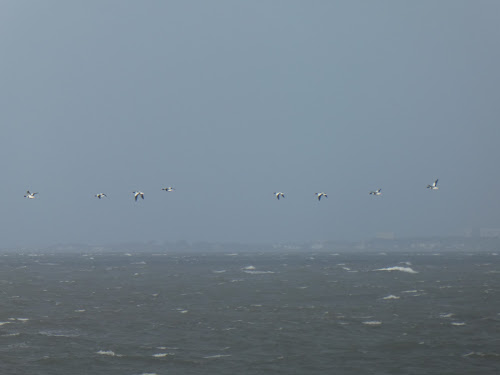 These are some of the 12 flying south. This is the same location as yesterday's struggling Pinkfoot. The Shelduck also flew low, but seemed to manage easily enough. The wind had eased slightly.
Nick Godden viewing from the Stone jetty also saw 9 Shelduck flying south, plus:
Pintail 11 south.
Posted by Pete Marsh at 20:41 No comments: