New Cetti's located as the weather calms down

Heysham Obs
So there have been "46ish Goldfinches on the seed all month".  So why were 29 out of 39 un-ringed this morning, despite two 'comprehensive' catches earlier in the month!   The answer can be found in e.g. the vis mig data from Portland (and e.g. Gibraltar Point) - November is still a major passage month for this species, even if it is not so discernable vis mig-wise on the west coast 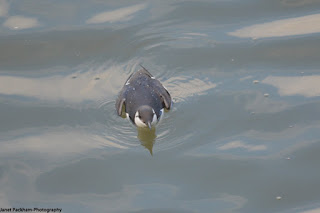 Middleton
Cetti's Warbler - one calling all the time, including the little churr, (but no song) in the willows along the southern bank of the western marsh - near the sewage works.  Didn't appear to be ringed but views of esp left leg very brief
Reed Bunting - 2
Tufted Duck - 6

Moths (Justine)
Stigmella alnetella/glutinosae on Alder at Middleton NR today. These two species need breeding through to be certain of which one it is.

Phyllonorycter rajella from MNR today. Alder is about the only species with leaves on now.