Heysham Obs
A female/immature Black Redstart was on the fences between Ocean Edge and the seawall to the outfalls at 0845hrs before eventually flying into the southern end of the power station site.  Otherwise the easterly airflow flattered to deceive and was generally too clear/high-clouded 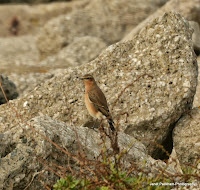 Wheatear at Ocean Edge this afternoon.

Small White on the sea wall near the outfalls this afternoon.
Posted by Pete Marsh at 14:18 No comments: