A bit more interest, including a passing Goosander

SSE wind to start with moved round to SSW by afternoon. Light showers with occasional sunshine.

Just my mid morning stroll stuff so far (MD)
South Shore
Raven 1 chased east from Ocean Edge by resident Carrion Crows
Kestrel 1
Shelduck 56
Wigeon 63
Rock Pipits 3  (one each on Red Nab, sea wall and inner harbour)
There have been a lot more gulls on No.2 outflow for the last few days, mainly Black-Headed gulls but today joined by this 2nd calendar year Mediterranean gull, but not for long before it returned to the mud.
Goosander are not common in the recording area, this is only the second record this year (two were seen on 26th April). 11:00 this female or immature bird flew south past the wooden jetty.
Hard to see detail, both on this clip and in real time, their wing beats are so fast. These are screen shots from the above clip, still not clear, but at least still. 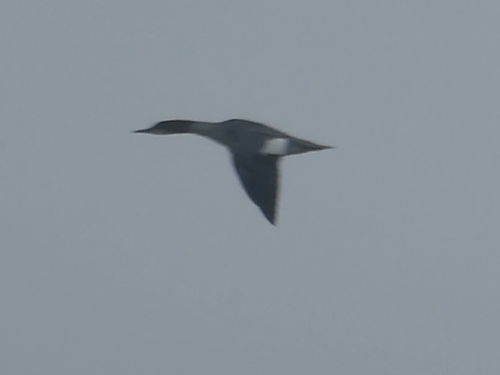