Strong southerly wind. The rain held off till lunchtime, after that the showers became heavier and more prolonged.
So far the only records are from the south shore in the morning.
Rock Pipits 7:
1 on west side of the saltmarsh flew over to the rocky outcrop on the east side
1 feeding along the foreshore. No sign of any hostility today. I realised that the area that they have been squabbling in, is a territory that has been held by a Robin over winter, perhaps the Robin's section was acting as a buffer zone between two lots of Rock Pipits, or perhaps another Rock pipit tried to fill the now vacated Robin territory. Either way, it would seem the Robin moving out was the cause of the conflicts (MD).
1 feeding on Red Nab
1 on sea wall between the outflows
2 near lighthouse
1 near the waterfall
These two shots by Janet are one of the lighthouse birds. It has white flank feathers showing on the edge of each wing, it was like this the last time it was seen. It was windy today, but this was the only bird of the 7 to have flank feathers showing like this. Probably just a coincidence, but it would be nice to have a distinguishing feature on one of the birds (or just wishful thinking? MD) 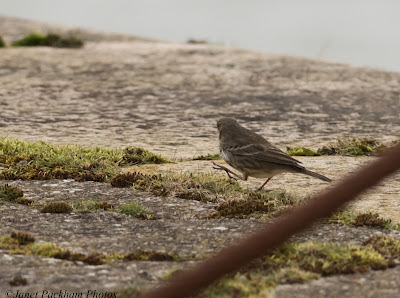 Meadow Pipit 3 near Red Nab
Stonechat 3 - all came in off Red Nab. 1 female 10:20 plus 1 male and female 11:20. Who knows if/what in between. Moving quickly inland.
It didn't hang around
Grey Wagtail 1 - again inland quickly from Red Nab
Song Thrush 1 resting out of the wind in the inner harbour
Raven 1 over the trees behind Red Nab, quickly moved on by the resident Carrion Crow
This shot by Janet shows the detail of the Cormorant's breeding plumage 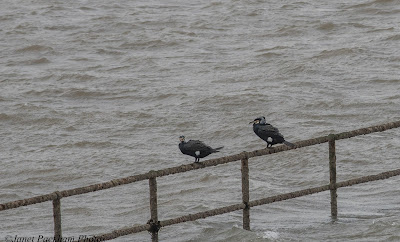